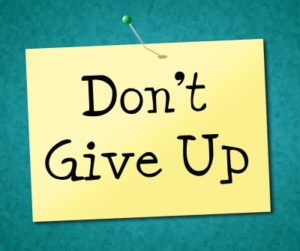 Have you ever watched a toddler over the course of several hours? They’re amazing! After taking their very first step, they plow forward with such intensity you might think they’re going to break into a run. Instead, they stumble and drop to their seat. Without crying or skipping a beat, they try it again. No overthinking or blaming. Fall down? Get up! Simple.

Why then, when faced with obstacles, do adults often retreat, shut down, blame, overthink things and make excuses? Of course, as an adult, you have experienced more and know more, and it is probably very wise to consider your next action after a setback. Using a “pause, examine and reboot” approach is pragmatic. But when you haven’t met your goal, what point is there in quitting altogether? (This is meant as a rhetorical question — I’m not a therapist, so I won’t nod and agree with you unless you say you quit smoking.)

Perseverance has been recognized by many successful people as the key ingredient behind their accomplishments. Although the term essentially implies you have begun something and are pushing forward, some people quit before they even get started. To follow the lead of a two-year-old, you know you can’t run before you walk. Spending more time describing why not instead of looking for how takes you in the wrong direction. That effort doesn’t lead you to a solution. Instead, if we can assume you have started on your pursuit of something and are just at a stalemate of sorts, then let’s implement a different strategy for getting unstuck.

One way to get past a block or overcome your own resistance is to have a process for breaking your goal down into facts and actions. Here are some steps you can take to help you see possibilities that may not have surfaced.

Brainstorm. Treat your idea as if anything is possible. Start by making a list all the crazy options you could pursue that could potentially change things for you. Don’t assess them yet — just list them.

Analyze your options. Once you have created a list of options (more than two), then you can start the process of analysis. This is a key point. Analysis is still neutral. Analysis is not elimination or acceptance. It means you are parsing out everything that could lead to “how” your change or new idea can be accomplished, even if some ideas seem farfetched. Don’t decide to include or omit any ideas without making sure you know the facts.

Vet your assumptions. Until you have collected all the facts, you can’t make a viable assessment. Don’t act on assumptions that allow you to shut down without finding out if they are indeed valid. If you have only assumed some things are not possible but really aren’t sure of all of the facts, then some research may be in order. Talk to people in your network. Read. Ask questions.

Assess. Once you have actual data to work with, it is time to assess it all and begin the process of elimination. Real barriers could be conflicts with location or lack of immediate funding in relation to timing (separately, these factors might not be an obstacle), additional resources or knowledge. Based on your research, you can now ascertain if a delay in timing would make a difference. You might be able to acquire funding at a later date, or you may need to build some specific skills before moving forward. These factors could still lead you in the direction of your goal with an adjustment to your expectations around timing. In other words, don’t throw the baby out with the bathwater.

Pick something to try. You may not have all the answers. You may not have all the money you need or the skills required — yet. That doesn’t mean you can’t proceed. It just means they need to be factored in. Allowing your timeline to stretch can help you turn an idea into a possibility when at first glance it seemed impossible due to a narrow window of time. Instead of something occurring next year, you may need to set your sights on five years.

Create a plan that includes specific objectives and timelines. Consistently doing a little on a regular basis can keep you moving forward. Avoid setting unrealistic expectations. Break down big goals into smaller objectives. Then break down those objectives even further into specific tasks and add them to your calendar. Those smaller chunks will be easier to wrap your mind around and commit to. Doing less more often makes the completion much more manageable than if you expect to accomplish everything at once.

Monitor your progress. There’s more to getting something accomplished than dreaming. Be willing to put effort into all of the actions required and monitor your progress each week. Make adjustments sooner rather than later to ensure you don’t go off into a ditch.

Although two-year-olds may not have a sophisticated approach to things, it’s probably true that they are compelled to keep going and try, try again. Don’t quit!