Failing to commit has sometimes been recognized as a West Coast issue, but I haven’t seen hard statistics about it. I don’t really know if this trend is limited to one area or not, but from what I observe, the reluctance to commit to just about anything is an increasing phenomenon in the Pacific Northwest.

There’s a huge difference between evaluating and weighing out options to see what works best and just not getting around to making a decision (until it is too late). Perhaps a passive approach that involves not saying yes or no has been acceptable to some, but it can also negatively impact others with a vested interest in an event or project when they are unable to rely on the participants. The Pacific Northwest has been called out by people from other areas for its passive-aggressive culture. Perhaps not making a commitment falls into this category and is really just another form of controlling a situation.

It may also be tied to particular generations or someone’s upbringing. I may be dating myself, but when I was young, we were taught it was appropriate to say yes to the first person who extended an invitation to you and discourteous to wait to see if a second/better invitation came in. I can’t say that using that learned response was absolutely correct, but there is something to be said about acknowledging someone’s interest with a favorable response. Saying yes or no produces a circumstance that allows for more specific preparation. Sometimes saying yes to small or inconsequential things makes it easier to say no to something you feel strongly about. Always lingering or saying no to everything at the last minute can cause others to lose interest, and more importantly, it can erode trust.

The whole process of knowing what you want and identifying your commitments in advance has merit. It makes it easier to make a realistic decision about your time and participation in events later. Planning further ahead for known, important events and scheduling time for them allows others to make plans with you. It allows you time to prepare to make the most out of each event or activity. Waiting until the last minute to make a decision typically creates stress, because it either nags at you the entire time you are still on the fence or there are actual consequences for responding late. If a lack of interest in what you are facing is motivating your procrastination, then it is better to evaluate why and figure out what you need to do about it instead of ignoring the issue. If you have delayed your response because you faced competing events or decisions, then recognize how a late response may ultimately limit your options altogether. 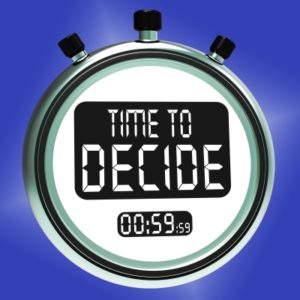 In the same way putting off decisions regarding participation or attendance can derail you down the line, not knowing what you want and waiting too long to decide what to do can also hinder your success with employment. If your goals are unclear, then the right situation can pass you by because you won’t be able to recognize it. If you are allowing your financial situation to be your only motivation, then you may be faced with far fewer options to choose from. Fewer options stack the deck the wrong way if you are betting on finding satisfaction with just “any” new job.

Most of the time, it would be better all the way around if people would come clean about their interests and motivations from the get-go instead of pretending that their decisions and actions (or lack thereof) affect only them. Putting things off makes it harder to develop creative solutions or find a compromise. Keeping your options open too long can ultimately force you to simply acquiesce to unpleasant situations or accept the inevitable instead of having choices. Time that could have been taken to collaborate or cooperate with others will have been wasted. Perpetual procrastination and failure to commit to anything can ultimately suck away your power to choose altogether. Bottom line:

Make a commitment to do something!