Procrastination is an excuse, not a reason

One of the biggest factors I see impacting many people’s pursuit of their employment goals stems from making excuses for not getting things done on time — or, in some cases, ever. When asking someone why they didn’t carry out their objectives for the week, I’ve heard everything from the usual “my dog ate my homework” to “I couldn’t do it because I had to take my dead cat to the vet.” Procrastination doesn’t make things better, and it doesn’t relieve someone from responsibility. It typically only makes things worse. Waiting too long can lead to missed opportunities, and in the long run, it can prolong uncomfortable circumstances.

Procrastination is the enemy

A “wait until later” mentality is often connected to the belief that something better will happen by “waiting long enough.” Both options tend to lead to a repeat of past unsatisfactory experiences and negative consequences. Procrastination is the 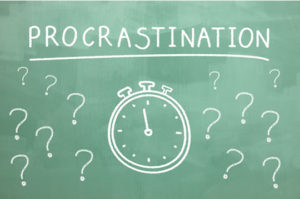 enemy that sucks up time that is better spent working towards something desirable. Procrastination doesn’t give you a pass when it comes to paying your bills on time, nor does it open doors that have remained shut. Whether you wait to pay taxes and end up paying a penalty or put off contacting the person your friend knew who had a job opportunity in their department, putting things off has consequences. Opportunity knocks only once. The ship sailed. The train left the station. Not taking immediate advantage of leads can cause them to disappear. Not taking steps to improve an ugly employment situation can lead to health issues or, more commonly than not, prolonged unemployment.

Now, I’m not living in dreamland, nor do I lack compassion. We all face life interruptions, unplanned events and emergencies at some time or another. I’ve had my share, and they are certainly reasons to become distracted. But the further we get behind on all previously known issues, the more problems intensify, making it that much harder to cope with an actual emergency without dropping all other balls. So an emergency isn’t the real reason you didn’t pay your taxes on time (you knew all year they would be due) or why you didn’t get to your job search activities. The real reason is that you put these things off so long that the urgent state of everything at the time of the emergency was compounded. Procrastination is an excuse, not a reason. 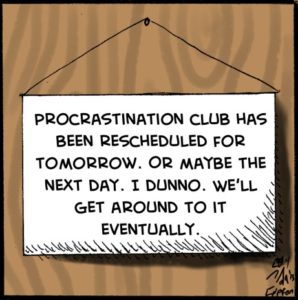 It’s pretty common for people to suffer through years of financial uncertainty by accepting serial temp roles because it was “easier.” Instead of proactively pursuing a plan for securing rewarding, stable employment with a company that is a cultural fit, they end up doing nothing more than notifying staffing agencies of their availability and waiting for a call. Instead of setting goals for what they said they wanted to achieve and then taking steps to achieve them, they allow external forces to push them in the direction of least resistance. The consistently occurring result is accepting whatever comes along when their unemployment benefits run out. Without accountability, it’s common to justify taking a passive approach. So along the way, someone who is prone to procrastination may allow any issue outside of employment that presents itself to capture their full attention and serve as their “reason” (read: excuse) for not pursuing a plan. This becomes a habit, and the cycle gets repeated the next time an interruption in employment occurs.

Ignoring your circumstances or taking a passive approach to your job search can lead to results that do not satisfy your goals. The answer is not to sit back and “wait and see” but to start being accountable for your own actions or lack thereof. Waiting to take action or dropping the ball are correctable situations. If you’re unemployed or have been in a bad space at work for a while, taking the summer off is only delaying the inevitable. Waiting until fall when everyone else ramps up their job search will only make things worse. If you don’t want to hear “a day late and a dollar short,” then get started on a remedy for your circumstances now. Stop procrastinating!