When you know it is time to go 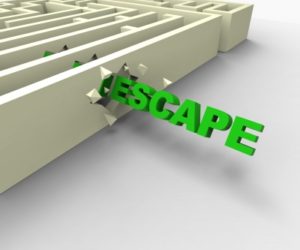 You may not remember exactly when you stopped being excited about getting to work and tackling the day’s challenges. It may have started as a gentle feeling of reluctance – sleeping an extra ten minutes after the alarm went off, or choosing to stop and get a latte on the way to work, even though you were already running late. A few extra z’s helped and a double mocha frappée was a good distraction for a little while, but now delaying your arrival can’t prevent what has evolved into a full-blown feeling of dread the minute you open the front door of the building.

Complacency is only making things worse.

Whining (or “wining”) at happy hour isn’t going to change things. If your personal goals have gotten blurry and your work goals feel like moving targets, it’s time to get a handle on things. Complacency is only making things worse.  Odds are there are more clues around you than just how you feel. You know it is time to move on when:

There is no opportunity for promotion. This point only matters if 1) you had plans to rise up in the ranks and there is no longer a clear path to a viable position or 2) the company expects people to advance and there is nothing you really are qualified to do or are interested in doing at a higher level. It could be that you came in at a time when what you were interested in doing was exactly what the organization needed. You may have been able to plan a trajectory for the next few years that made sense then, but now things changed. The next-level position disappeared or the bar was raised to an impossible level for you to be able to compete for it. It could also be that you were perfectly happy doing what you were doing, but the pressure to advance has now become greater than any praise you’re getting for doing a good job at the level you are in. What you were doing may have worked well for a number of years, but the company’s agenda/needs have changed. There are younger, hungrier candidates being hired around you and you are now being expected to step up or move over.

An entirely different skill set is needed. You may have previously performed at a high level using skills or tools that have become obsolete. (Imagine what happened to switchboard operators 50 years ago and COBOL programmers 20 years ago.)Technologies changed and you may have missed the opportunity to master the new skills. Or, roles that relied on interpersonal skills may have been replaced with software applications that spit out metrics to make decisions. Where negotiating may have played a big part in getting things to move in the right direction in the past, the expected outcomes are now automated and there is no discussion required. The ability to manipulate and report data may now outweigh the need to communicate verbally or influence others.

Lateral changes are frowned upon. You have become bored with what you do and would like to learn more in another area, but the company prefers to hire people with vast experience in the area you would like to move into, rather than train internally. Or, it may have been suggested that you move into an advanced role and you declined because the focus of your work was not something you felt inclined to become an expert in or advise others about. Once advancement has been offered and declined, it’s difficult to change management’s perception of how you fit with their needs.

Your supervisor has suggested you find another job. It’s hard to imagine, but yes, this happens more often than you might think. Under-skilled/impatient managers can be quick to vaguely suggest that you make a change when they think you need to get out of the way to allow someone else to come in (who is more like what they want). They may be unable or unwilling to coach you to meet performance demands. Putting the onus on you to “find another job” is less of an investment on their part and it may seem like a good plan or reasonable approach to them.

The organization/leadership doesn’t support personal development. You’ve become painfully aware that your skills are slipping out of date, but additional training or the time off to get it is never approved. There is no one to take your place, and it would never cross your supervisor’s mind to step in and allow you the time away. Training may even be recommended in your performance evaluations, but the expectation is that you continue to do what is physically required in a 24/7 environment without relief and it’s up to you to find the time/resources for skill building.

Leadership is only out for themselves. You are understaffed and overworked. Hiring freezes persist or the average wage you can offer those you are allowed to hire is well below what they can find elsewhere. Overtime pay is forbidden, but you are exempt and are expected to suck it up. Staffing is an ongoing problem and you are drowning. You haven’t had time to breathe, let alone recharge and your vacation requests have been denied.  In the meantime, management appears to be oblivious to the challenges your department faces on a daily basis. They continue to attend conferences and take vacations without a care in the world about what is happening around them. And, they can do that, because they’ll set you up as the fall guy when things go to hell in a handbasket.

Don’t wait for someone else to call the next shot.

If you are still there, then you are at the helm. Get yourself unstuck and start moving forward. The first step is to reshape your personal and professional goals, then assess how they align with your current situation. If they are as out of whack as you are feeling, then it is important to clarify what you really want so that you are able to put a plan together. Your vision doesn’t need to be exact or absolutely specific, but there is more to know than that you simply “want out”. You need to have a clearer idea of what will be good for you going forward and what you actually might enjoy. Determine the kind of environment that will allow you to thrive and decide what you need to get out of your next supervisor. Once you have countermeasures outlined, it’s time to put your plan in place and get the heck out. Don’t wait for someone else to call the next shot.